Today is the second day.

When we finished eating, the sun had set, and the two moons had begun to rise instead.

"Ah, I'm so full. I never thought I'd be able to eat so much food while adventuring." [Ryer]

All of the emergency foods are highly praised.

I promised to discuss which emergency foods would be best suited for adventurers at a later date with the four of them.

Leave it to us! Kiki was slapping her chest, but she was drooling, which made me feel uneasy.

After dinner, all we need to do is sleep.

Since this is not a vacation, we do not have much to do, so we go to bed.

"Me, Rolf, and Kiki will take turns doing the night watch. Shirou and Nesca can sleep." [Ryer]

Watching out for monsters is a very important role.

I'm an amateur, so of course, I can't do it. But even Nesca, who's usually so careless, is not suited for this role.

"First, I'll do the night watch. Rolf will be next, and then Kiki." [Ryer]

The four of them took out blankets from their bag and wrapped themselves in them.

Kiki and Nesca lay down on the ground while Ryer and Rolf leaned against a tree.

No matter how tired I am, I can't fall asleep easily as I usually go to bed after midnight.

"Really? As a merchant, you must have a lot of money to be able to stay up so late every day." [Ryer]

"Eh? Why does staying up late mean I have a lot of money?" [Shirou]

"Well, if you're up until midnight, that means you're using candles and lamps, right? Candles and lamp oil are expensive. Only aristocrats and merchants would use them without hesitation." [Ryer]

I couldn't help but clap my hands when I heard Ryer's explanation.

It's easy to forget when you live in Japan, where the infrastructure is so good, but in this world, it costs a lot of money to keep the lights on.

No wonder Aina wakes up so early.

Just realizing these facts alone makes the experience of accompanying these adventurers worthwhile.

"I'm happy to learn from you, but won't it interfere with your watch?" [Shirou]

"I can't be an adventurer if I lose my guard just because I'm talking with someone. And I've been an adventurer for 11 years. Do you know what that means?" [Ryer]

I chuckled back at him.

"That makes you a veteran, am I right?" [Shirou]

Ryer said that he would be happy to chat with me because he doesn't have anything to do when doing the night watch alone.

I was worried about disturbing the other three's sleep, but he said that if they were so sensitive that they couldn't sleep with other people talking, it means they aren't cut out to be adventurers.

I guess it's not easy to work as an adventurer.

So I decided to talk to Ryer until I fell asleep.

"Yeah. Sleeping bags are warm, but you can't move in case of an emergency. Adventurers usually sleep wrapped in cloaks and blankets. See, my friends do the same, right?" [Ryer]

"Well, it is fine now. But in the winter, it's so cold that we'll die if we don't make a fire to keep warm. But if we add more blankets, it will become a burden." [Ryer]

Ryer shook his head as if he remembers how troublesome the thing was.

"Aah, if only we had someone with space storage skills, we wouldn't have to worry about luggage." [Ryer]

Suddenly, the words "space storage" came out of Ryer's mouth.

This is a chance to learn about my skills.

I couldn't miss this chance.

So I decided to casually ask him about space storage.

"Well. With a skill like that, you'll never be out of work. I heard that the Book of Space Storage Skills is hidden in the Ancient Magic Empire's dungeon." [Ryer]

"I wonder how much it would be worth if it was discovered." [Shirou]

"Hahaha! You're a merchant. You can't say that. It's the book of space storage skills. It depends on the storage capacity, but one wagon capacity can worth as much as a nobleman mansion." [Ryer]

I have such a great skill?

It looks like I made the right decision to hide the fact that I have space storage skills.

I am so smart.

Next time, I'll try to test how much I can store.

By talking with Ryer, I was able to gain a lot of knowledge about this world.

Before I knew it, the two moons had risen above us, and the fatigue from the daytime made me sleepy.

"Thank you for all the things you've taught me. I'm finally getting sleepy, so I think I'll go to bed." [Shirou]

At that moment, Ryer-san gets up and puts his hand on his sword.

Something is wrong with Ryer.

"Shit. It's getting closer. Kiki, Rolf, wake up! I'm sorry, An-chan, but please wake up Nesca. She doesn't wake up easily." [Ryer]

"Nesca-san! Stop dreaming about chocolate. Please wake up. It's an emergency." [Shirou]

"Like An-chan said, Nesca. Wake up quickly and be ready to cast your spell." [Ryer]

Nesca-san wakes up from her sleep.

The other two, Kiki and Rolf, are already awake and holding their weapons.

Kiki's nose twitched, and she shook her head.

When Rolf grabbed his mace, suddenly, we heard the sound of rustling grass and trees coming from the bushes behind us.

I reflexively turned around.

Right in front of my eyes, there is a very big bear.

"Damn it. Of all things, it's a Murder Grizzly? [Ryer]

When the four members of Blue Flash saw the bear, a grim expression appeared on their faces.

A mace is a blunt weapon, a type of club or virge that uses a heavy head on the end of a handle to deliver powerful strikes. The mace was mainly used to deal blows  upon the head of an enemy. 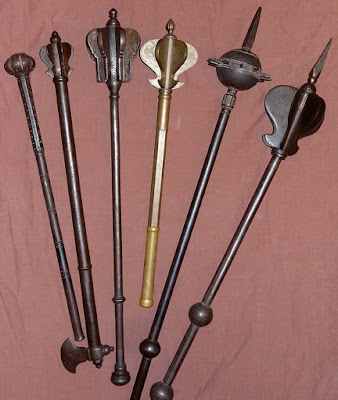