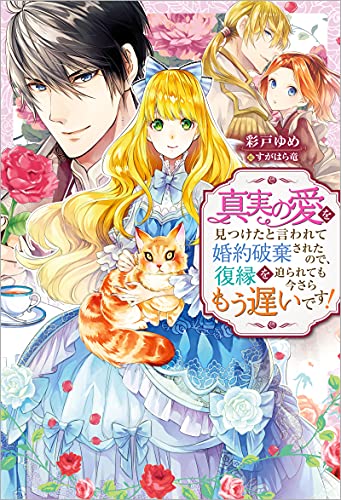 My fiance told me he had found his true love and broke off our engagement. It's too late to ask me to get back together now!

Chapter 1: What is love?

"I'm sorry, Mariabelle. I want to break off our engagement."

A bolt out of the blue; perhaps this is exactly what it means.

As usual, Mariabelle visited the royal palace to attend the Crown Prince & Princess education class. What awaited her there was not the usual stern-faced teacher but her fiancé, Edward the Crown Prince.

Mariabelle's eyes widened in surprise as she stared at Edward.

When she asked back in a faint voice, Edward looked very sorry and lowered his eyes.

At the same time, the sound of Mariabelle's maid taking a breath could be heard behind her.

He has found his true love.

Edward lifts his eyes from the floor and looks into Mariabelle's eyes, but Mariabelle doesn't know what she should say to him.

Mariabelle desperately tries to remember her education as the crown princess.

But as if to interrupt her, Edward's words echo inside her head, and she can't think straight.

When Mariabelle was seven years old, her engagement with Edward was decided.

Edward's mother is from an old but not very powerful marquis family. His mother married the then Crown Prince, who fell in love with her beauty. But for a long time they were not blessed with children. Until finally, the long-awaited heir was born.

After that, his younger sister was born as well. As the only heir to the throne, Edward was raised with great care and attention.

Although he was raised in such a pampered manner, Edward has an honest and straight personality.

However, he has a tendency to be overly honest. Therefore, Mariabelle was educated harshly to become the Queen and support him in the future.

In addition to poetry, dance, and sewing (all of which are essential for a lady), she had to learn about the surrounding countries for diplomacy.

As for the language, the common language is enough to communicate with others. But it is necessary to learn the phrases unique for each country.

Mariabelle was supposed to cover what Edward lacked in this way.

From a young age, Mariabelle had been strictly trained to be Edward's fiancée. She could think of no one else but Edward to marry.

And since she will marry Edward, she does not need to think about what love is.

Among the books that Mariabelle was allowed to read, there were a few romance novels. Certainly, the main characters in those novels overcame their difficulties with the power of love.

But none of the stories were about people bonded by "true love". There were no stories about a woman like Mariabelle, who is asked to break off her engagement.

Mariabelle has no answer. She has no idea how to respond to this situation.

But her teacher always tells her to do what she wants.

If that is the case, then there is only one course of action for Maryabelle to take.

She said as she bowed her head deeply. Edward let out a breath as if he was relieved.

Please kindly help me to fill this online POLL